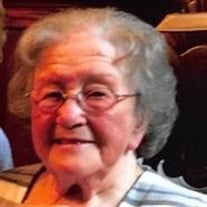 KIMMELL - Bessie J. Mullins, age 90, of Kimmell, IN, went home to be with The Lord on January 29, 2018. She was born on December 17, 1927 in Jenkins, KY to Hardaway & Oggie (Mullins) Vanover. On November 21, 1946 she married Emal Mullins. He preceded her in death on July 11, 2011. Mrs. Mullins was a graduate of Clintwood High School in 1944, in Clintwood, VA. She relocated to Indiana in 1962. She was a member of the Columbia City Freewill Baptist Church and went on to retire from Monsanto and Starcraft companies after many years of service. She really enjoyed anything and everything to do with gardening. She has created so many memories with her family and will be dearly missed. She is survived by four children; Linda Carol (John) Craft of Kimmell, IN, Bernie (Linda) Mullins of Ligonier, IN, and Ray (Jo) Mullins of Ligonier, IN, Marie (Todd) Renner of Albion, IN; 11 grandchildren; 15 great-grandchildren; brother, Herbert Phelps of Tennessee; sister, Snoda Combs of Clintwood, VA; and a very special niece, Jo (Jim) Stapleton of Jonesborough, TN. She was preceded in death by her husband, Emal Mullins, and her parents, Hardaway and Oggie Vanover. A funeral service was held in her honor on Friday, February 2, 2018 at 11 AM at Yeager Funeral Home, with Pastor Terry Hines officiating. Friends called from 10 AM to 11 AM prior to the service at the funeral home, 1589 Lincolnway South, Ligonier, IN 46767. Burial took place at Sparta Cemetery following the funeral service. Friends and family gathered from 3 PM – 8PM on Thursday, February 1, 2018 at Yeager Funeral Home.

The family of Bessie J Mullins created this Life Tributes page to make it easy to share your memories.