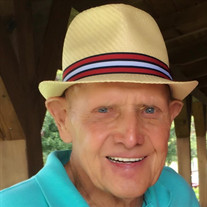 Billy Dean Wolfe November 22, 1936 – June 1, 2019 Surrounded by his loving family, Billy Dean Wolfe of Lebanon, VA passed away in his home on June 1, 2019 at the age of 82. He was born on November 22,1936 to the late Holland Wolfe and Barbara Ellen Kiser. One of 11 children, he is survived by his siblings, Eula Mae Brooks, Erma Faye Benesz, Radford Eugene Wolfe, Allen Odell Wolfe, Dewey Herman Wolfe, Shirley Christine Shelton, Glenda Gail Nance, Anita Carol Stone. He is preceded in death by his wife Sylvia Jean Wolfe and siblings Carl Lanis Wolfe, Paul C Wolfe. He grew up on Hazel Mountain and attended school at the old Hamlin School. August 9, 1955 he would join the Army and was honorably discharged in 1957. With a good conduct medal. Bill married Sylvia on July 27, 1959. He would later purchase the very land where he went to school and there he established his family home. He was a loving father to his children, Sheila Viers and husband Keith, Bobby Wolfe and Beverlie Rose, Pamela Sweeney and husband Bob, and Leisa Crawford and husband Keith. His grandchildren and great grandchildren, Scott Salyer and wife Beth, Jeremy Fraley and fiancé, Chasity, Sarah Sweeney, Samantha Slayer, Brittany Rose, Nathaniel Sweeney, Josie Crawford, Braden Crawford, Tristan Salyer, Austin Salyer, Victoria Rose and Tyler Rose. Bill’s life was devoted to family and friends. He had had a witty sense of humor and great memory. He could deliver a joke and have everyone laughing. He loved to talk to people and was not shy about sharing his faith. One of his greatest desires was for everyone come to know his Savior, Jesus Christ. He served as deacon and teacher at Mount Pleasant Missionary Baptist Church. He retired from Clinchfield Coal Company. Come and celebrate his life as we gather at Clintwood Baptist Church, 179 Clintwood Main Street, Clintwood, VA 24228 on June 8, 2019 from 11am – 1pm. Pastor Joe Hutchenson will be officiating services. The family is grateful for the condolences with a special note of gratitude for hospice services. Mullins Funeral Home and Staff are serving the Wolfe Family. Online condolences may be made at www.mullinsfuneralhome.net.

The family of Billy Dean Wolfe created this Life Tributes page to make it easy to share your memories.

Send flowers to the Wolfe family.