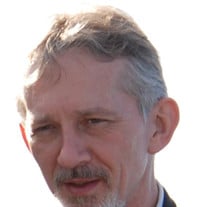 Charles Lawrence Cummins, age 63, unexpectedly left his adventurous life journey due to complications of diabetes on September 4, 2019 at his home in Lexington, N.C. He is preceded in death by his father, Ralph E Cummins. Charles spent his early years in Clintwood, VA, where he attended Clintwood Elementary School and graduated from Clintwood High School in 1975. While in high school, he was very active in sports and lettered in football, basketball and track. He played football during some very successful years of winning for the Clintwood Green Wave team. He designed the logo Willie the Wave that was used for many years on team equipment and displays. Not long after graduation from high school, Charles enlisted in the Air Force, where he served as an Electronic Warfare Specialist. He had started his post high school education at Mountain Empire Community College in Big Stone Gap, VA then later obtained his associates degree in electronics in the early ‘80’s from Gulf State Community College in Panama City, FL. During the course of his electronics career he worked for several companies in Maryland, Georgia and Virginia. At the time of his passing he was employed by Multi Packaging Solutions in Lexington, NC. During his early years, teachers, family and friends began to recognize Charles’ artistic and creative gifts, which he often exhibited through his artwork and poetry. He continued throughout his life to spend his leisure time painting, drawing, building beautiful wood boxes and writing poetry. He possessed a gift of being able to visualize a project and then bring it to life in amazing ways. Friends and family now possess many beautiful items created by Charles at various points in his life, and these items will forever be treasured. Charles drew his energy from everyone who surrounded him but especially from his family. He is survived by three children, his daughter Carolyn (Carrie) Cummins Moss (Hagerstown, MD) (husband Tim), two sons, Jeremy Cummins (Lanett, AL) and Ian Cummins (Tampa, FL), and two grandchildren, Griffin Moss and Calvin Moss. His children and grandchildren were his greatest achievement, and he was so proud to see them develop into the fine people they have become. Charles is also survived by his mother, Carolyn Perkins Cummins of Clintwood, Virginia, one brother Christopher Cummins (Williamsburg, VA) (wife Mary Anne), five sisters, Catherine Cummins (Clintwood, VA), Carol Cummins Morley (Lees Summit, Mo) (husband Emmett), Cheryl Cummins (Richmond, VA), Claudia Cummins Knapp (Williamsburg, VA) (husband Allen), Cecilia Cummins Lasyone (Londonderry, NH) (husband Mark), and multiple nieces, nephews, grand-nieces and grand-nephews. Our family’s life has been greatly enriched by Charles’ spirit and love. A Celebration of Life service for Charles will be held on Saturday, September 14 at 3:00 p.m. at Clintwood United Methodist Church in Clintwood, Virginia. The family will gather before the service at 2:00 p.m. to welcome and greet friends. A VFW military service will also be conducted by VFW Post 8979 and The United States Air Force. The family wants to thank Mullins Funeral Home in Clintwood who have been in charge of arrangements. The family requests that, in lieu of flowers, memorial donations be made to the American Diabetes Association. You may make a memorial donation in memory of Charles by either mail at American Diabetes Association, 2451 Crystal Drive, Suite 900, Arlington, VA 22202 or by phone at 1-800-DIABETES (1-800-342-2383). Your donation is tax-deductible to the full extent of the law. The American Diabetes Foundation tax ID is #13-1623888. The Cummins family sincerely expresses our hope that no family should ever lose a family member to this disease. Mullins Funeral Home and Staff are serving the Cummins Family. Online condolences may be made at www.mullinsfuneralhome.net.

Charles Lawrence Cummins, age 63, unexpectedly left his adventurous life journey due to complications of diabetes on September 4, 2019 at his home in Lexington, N.C. He is preceded in death by his father, Ralph E Cummins. Charles spent his... View Obituary & Service Information

The family of Charles Lawrence Cummins created this Life Tributes page to make it easy to share your memories.

Send flowers to the Cummins family.