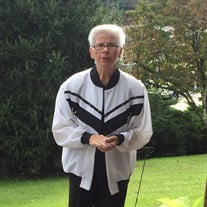 Marie Smith Fleming Stanley, age 75, was born on February 15, 1944 and passed away Tuesday, June 4, 2019. Marie attended Old Maple Grove Baptist Church and worked for the Town of Clintwood, Virginia for 36 years. She was preceded in death... View Obituary & Service Information

The family of Ethel Marie Stanley created this Life Tributes page to make it easy to share your memories.