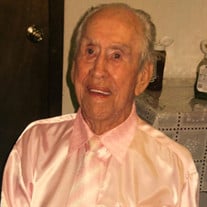 Glen Lawrence, age 94, passed away Friday, September 13, 2019 at Pikeville Medical Center. He was born in Laneville, West Virginia and moved to Dickenson County in the early seventies. He was a charter member of Calvary Baptist Church. He... View Obituary & Service Information

The family of Glen Lawrence created this Life Tributes page to make it easy to share your memories.

Send flowers to the Lawrence family.