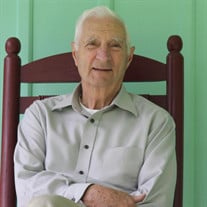 Harold Ray Stanley, 89, of Clintwood, VA, passed away on February 4, 2019 peacefully at his home surrounded by his children and grandchildren. He was of the Christian faith. Born November 5, 1929 to Carl and Zelda Stanley of Clintwood he was preceded in death by his wife of 63 years Gaynell Stanley; his parents; and a sister, Betty Sippel. He leaves behind one daughter: Patti and her husband Jerry Varney of Claypool Hill, VA; two sons: Michael Stanley of Clintwood, and Richard and wife Darlene Stanley of Clintwood; four grandchildren, Holly and husband Kevin Helton of Chesterfield, VA, Adam and wife Kristie Varney of Cedar Bluff, VA, Kristin and husband Rocky Edwards of Dublin, VA, Brian and wife Heather Stanley of Suffolk, VA; and five great grandsons: Brody and Tanner Helton, Samuel and Jeremy Varney, and Andrew Edwards; four sisters, Rose Brooks, Helen Mullins, Nona Cantrell and Mona Brommer; two brothers Bobby Stanley and James Vernon Stanley. He proudly served in the United States Army from 1946 to 1948 and spent most of that time in California. Upon returning home he married his wife Gaynell and began his mining career. He retired as Safety Mine Director from Island Creek Coal Company. During the highlight of his career he participated in and led Island Creek Coal Company to many safety inspection awards and accomplishments. After retiring from Island Creek at the age of 55, he spent the remaining years of his life on Brush Creek enjoying the outdoors and gardening. When remembered by children and grandchildren two words come to mind, Honor and Patience. A private memorial service will be held at a later date and time. Mullins Funeral Home and Staff are serving the Stanley Family. Online condolences may be made at www.mullinsfuneralhome.net

Harold Ray Stanley, 89, of Clintwood, VA, passed away on February 4, 2019 peacefully at his home surrounded by his children and grandchildren. He was of the Christian faith. Born November 5, 1929 to Carl and Zelda Stanley of Clintwood he was... View Obituary & Service Information

The family of Harold Ray Stanley created this Life Tributes page to make it easy to share your memories.

Harold Ray Stanley, 89, of Clintwood, VA, passed away on February...