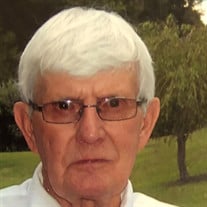 Harold Lee Stanley, age 89 passed away Sunday, April 24, 2022 at Holston Manor Nursing Home in Kingsport, Tennessee. He was born in Buchanan County and resided in Dickenson County since 1944. He was of the Christian faith and was a veteran of the United States Air Force and served during the Korean Era. Harold was a member of The Clintwood Masonic Lodge # 66 and The Shriners. He was a former mayor of Clintwood, Virginia and also served on The Clintwood Town Council. He was first employed at Lee Funeral Home in Washington, D.C. and then worked in the coal mines with his father. He also drove a school bus in Dickenson County for over 40 years. He was instrumental in the opening of the Miller Funeral Home business in 1959 and then was instrumental in opening Mullins Funeral Home where he served as a partner and stockholder. He was a local icon and touched many, many lives in his profession of School Bus driver and funeral directing and serving the Town of Clintwood, Virginia. He was preceded in death by his wife, Jane Stanley in January 2010; his parents, Lee and Leona Stanley; his brothers, Charles Stanley and Jess Stanley; his sister, Aileen Reedy; and several nieces and nephews. Survivors Include: His Son: Scott Stanley and wife, Keeta of Clintwood, Virginia One Sister: Shirley Linkous of Charlottesville, Virginia Brothers: Larry Stanley of Northern, Virginia and Gary Stanley of Vermont Two Special Step Grandchildren: Kiana Mullins and Gracie Mullins A Very Special Cousin: Peggy Johnson Several nieces and nephews The family will receive friends Thursday, April 28, 2022 at 12:30 p.m. at Mullins Funeral Home Chapel with a Masonic Service and Celebration of Life at 1:00 p.m. Burial will follow in the Logan Mullins Cemetery, Berry Drive, Clintwood, Virginia. Friends and family will serve as pallbearers. Honorary Pallbearers will be John Davis, Willie Brooks, Raben Fletcher, Roy Mullins, Rick Mullins, Rather Mullins, Chandra Mullins, Daniel Boone Mullins, and Scott Robinson. Mullins Funeral Home and Staff are serving the Stanley Family. Online condolences may be made at www.mullinsfuneralhome.net

Harold Lee Stanley, age 89 passed away Sunday, April 24, 2022 at Holston Manor Nursing Home in Kingsport, Tennessee. He was born in Buchanan County and resided in Dickenson County since 1944. He was of the Christian faith and was a veteran... View Obituary & Service Information

The family of Harold Lee Stanley created this Life Tributes page to make it easy to share your memories.