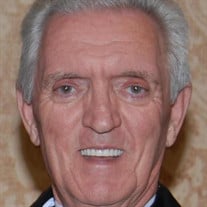 Jerry W. Johnson Sr., 77, Owensboro died Saturday, June 5, 2021 at Owensboro Health Regional Hospital. Jerry was born in Dickenson County, Virginia on December 31, 1943 to the late Carmel David Johnson and Mary Ruth Williams Johnson. He was a member of Mt. Carmel Baptist Church. After graduating from Ervinton High School in 1962, Jerry served in the United States Air Force in Hawaii until 1966, and then began his career at Clinch River Power in Virginia from 1966 to 1973, Gavin Power in Cheshire, Ohio from 1973-1984, and retired from Indiana Michigan Power in Rockport, Indiana after working there from 1984-1995. He then attended Arapahoe College where he earned an Associate's Degree in Funeral Service and worked as a Funeral Director and Embalmer at various places from 1996 to 2017. From there he worked at Menard's until March of 2020. He served his communities as a Paramedic and Chief of the Rescue Squad in Pleasant Point, West Virginia and volunteered with Big Brothers Big Sisters, Owensboro Health Volunteers, Rotary International, American Red Cross, Hospice of Western Kentucky, and the Daviess County Lion's Club. For all of those activities and participation, he was honored with the Star Award as Volunteer of the Year in 1985. In addition to his parents, he was preceded in death by a sister, Donna Marie Stallard. Survivors include his wife, Darlene Lambert Johnson; daughter, Michelle Love (Chris) of Owensboro; son, Jerry Wayne Johnson, Jr. (Cess) of Hallsville, TX; grandchildren, Briana Johnson of Glendale, AZ, Jessica Love of Louisville, and Daniel Love of Owensboro; step-children, Angie Clark (Brandon) of Owensboro and Jeff Clark (Natalie) of Jasper, IN; a step-grandson, Jayden Clark of Jasper, IN; several nieces and nephews; the mother of his children, Peggy Clifton of Point Pleasant, WV; and his dog, Runa. Services will be at 1:00pm on Wednesday, June 9, 2021 at James H. Davis Funeral Home & Crematory in Owensboro, Ky. Visitation will be on Tuesday from 3:00pm until 7:00pm and on Wednesday from 12:00pm until 1:00pm at James H Davis Funeral Home. A Celebration of Life will be held at 3:00 pm EST on Friday, June 11, 2021 at Mullins Funeral Home in Clintwood VA. Graveside burial with military honors will follow at Phipps Cemetery in Clintwood, VA. Expressions of sympathy may take the form of donations to the American Cancer Society or to the donor's favorite charity. Mullins Funeral Home and Staff are serving the Johnson family. Online condolences can be made at www.mullinsfuneralhome.net.

The family of Jerry W. Johnson created this Life Tributes page to make it easy to share your memories.

Send flowers to the Johnson family.