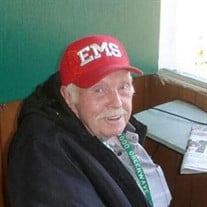 Joe Morrill Moore, age 82, of Clintwood passed away Tuesday, October, 15, 2019 at Heritage Hall after a recent illness. He was born in Saltville, VA on July 14, 1937 and had lived in Dickenson County since 1986. Joe was a 1956 graduate of R. B. Worthy High School in Saltville, Va., and a 1958 graduate of Hiwassee College in Madisonville, Tenn., with an Associate’s Degree in business. He was of the Methodist faith. He served as chairman of the Clintwood zoning and appeals council and planning commission. Joe is a retired paving estimator for Little Henry Paving Co. and a former manager and independent contractor of bowling centers in Clintwood, Va., Norton, Va., Richlands, Va., Harrogate, Tenn., Marion, Va., and Covington, Va. Joe had a passion for helping others that he demonstrated through his more than 40 years as an emergency services volunteer. He joined Clintwood Rescue Squad in 1990 and served as captain of the squad for 16 years, retiring in 2018. Clintwood Rescue Squad honored him by naming him a lifetime member and retiring his number, 312. Prior to moving to Clintwood, he was a volunteer with Wise Fire Department, Wise Rescue Squad and Jonesville Fire Department. He was the voice of the Clintwood Greenwave for 26 years, announcing home games up through the last one prior to the school consolidation in Dickenson County. He is a former member and past president of Clintwood Lions Club. He was proceeded in death by his wife Anna Mary Besch Moore and his parents John Howard and Ella Blanche St. John Moore. Survivors include: One Son: Jeffrey (Joan) Moore of Carrollton, Ky Two Daughters: Deborah Moore(Tina Grizzle) and JoAnn Deel, both of Clintwood, Va. Two Grandchildren: Frederick “Pickle” Deel and Selena Williams Adopted Children: Freddie Deel, Archie Mullins, Andrea Mullins and daughter, Megan Dear Friends: Ronnie Mullins, Ron Kendrick, and Rick Mullins Five Step Grandchildren: Eric, Ryan, Samantha, Logan, and Leah Eight Step Great Grandchildren: Owen, Serenity, Ali, Shasta, Fallon, Aveyara, Aurora, and Scarlette The family will receive friends Sunday, October 20, 2019 at 1:00 p.m. at Mullins Funeral Home Chapel. A memorial service will follow at 2:00 p.m. with Joe Hutchinson and Mike Stidham officiating. Mullins Funeral Home and Staff are serving the Moore Family. Online condolences may be made at www.mullinsfuneralhome.net

The family of Joe Morrill Moore created this Life Tributes page to make it easy to share your memories.

Send flowers to the Moore family.