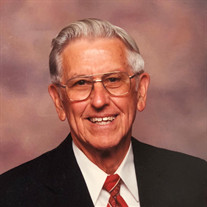 L. C. Sykes, age 88, passed away November 12, 2018 at Bristol Regional Medical Center. He was a resident of Dickenson County for 31 plus years and was a devoted Christian. He was a member of Clintwood Baptist Church and served in the Korean Conflict with the Air Force. He was a member of the AOPA (Aircraft Owners and Pilots Association), had his Pilot’s License, his Commercial License and Instrument Rating. He served as both Chairman of the Board of Deacon’s at various times in his life as well as a deacon. He dedicated his life to Christ and his family whom he loved. He was preceded in death by his parents, Noah and Samantha Sykes; his children, David Sykes and James Sykes; and his siblings Leon Sykes, Ival Sykes, Emogene Hatten, and Beulah Anderson. Survivors Include: Wife of 62 years: Patty Louise Sykes Children: Carl Steven Sykes and wife, Loyda; Rose Marie Sommerville and husband, Paul; Mary Anne Young and husband, James; and Jonathan Daniel Sykes and wife, Heather Seven Grandchildren: Kari Foulk, Shaun Sommerville, James Sykes, Kurt Sommerville, James Young III, Harrison Noah Young, and Liam Christopher-Mac Sykes Six Great Grandchildren: Zoe DeLatorre, Issac Foulk, Noah Foulk, Reid Sommerville, Declan Sommerville, and Everly Sommerville Pallbearers will be James Sykes, James Young III, Harrison Young, James Young Jr., Kurt Sommerville, and Liam Sykes. The family will receive friends Friday, November 16,2018 from 5:00 pm to 7:00 pm at Clintwood Baptist Church. Funeral services will follow at 7:00 pm with Pastor Joe Hutchinson officiating. In lieu of flowers, donations can be made to Tim Lee Ministries, P O Box 461674, Garland, TX 75046 or at timlee.org. Donations can also be made to Clintwood Baptist Church in memory of L. C. Sykes. Mullins Funeral Home and Staff are serving the Sykes Family. Online condolences may be made at www.mullinsfuneralhome.net

L. C. Sykes, age 88, passed away November 12, 2018 at Bristol Regional Medical Center. He was a resident of Dickenson County for 31 plus years and was a devoted Christian. He was a member of Clintwood Baptist Church and served in the Korean... View Obituary & Service Information

The family of L. C. Sykes created this Life Tributes page to make it easy to share your memories.

Send flowers to the Sykes family.