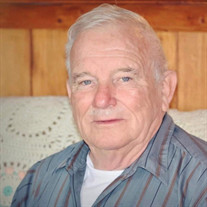 Marvin Melvin Carico, age 86, passed away Friday, December 18, 2020 at Holston Valley Hospital. He was born in Clinchco and lived in Dickenson County since 1972. He attended Mill Creek Freewill Baptist Church and was retired from The Virginia... View Obituary & Service Information

The family of Marvin Melvin Carico created this Life Tributes page to make it easy to share your memories.

Send flowers to the Carico family.