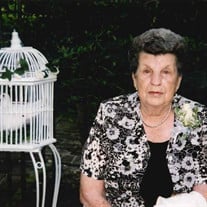 Ollie Marie &#8220;Jim&#8221; Linkous, age 95, passed away on Monday, June 25, 2018 at her residence in Clinchco, VA surrounded by her loving family. She was born in Cranes Nest, VA, a daughter of the late Leonard James and Minnie Blanche Johnson... View Obituary & Service Information

The family of Ollie Marie Linkous created this Life Tributes page to make it easy to share your memories.

Send flowers to the Linkous family.