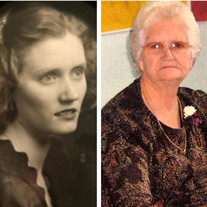 Sarah Jane Mullins May 7, 1930 - April 23, 2020 Life began for Sarah Jane Mullins, 89, with her parents Andy and Zella Mullins Perry of Clintwood, Virginia on May 7, 1930. They preceded her in death. Sarah Jane had four brothers. John Linton Perry (deceased) and wife Susie (deceased) of Clintwood, Virginia. Henry Perry (deceased) and wife Margaret (deceased) of Marion, Ohio. Tom Perry and wife Gloria (deceased) of Sandusky, Ohio. Harry Perry and wife of Tessie of Marion, Ohio. Sarah Jane had three sisters. Irene Perry who died at the young age of three months. Betty Jean Wallace and husband Jennings (deceased) of Marion, Ohio. Estie Cash (deceased) and husband Dennis Cash of Marion, Louisiana. Sarah at the age of 18 married Boyce Ray Mullins of Clintwood, Virginia on December 29, 1948. They have been married 71 years. Sarah Jane and Ray had a short courtship. He told his friend Bailey that he would be eating soup beans with her this winter. Ray went back to the Army and came back on leave and decided Jane was the woman for him. He courted her 3 times that week and told her mother that the washing couldn’t be done that day…..he and Jane were going to town to get married...and they did. Ray went back to the service in New Mexico and Jane stayed with her parents until his discharge. They settled down in a two-room house in Wolf Pen in Dickenson County, Virginia. They were ready to start their family. In 1950 Jane lost one male child. In January 1951, Donna Gail was born. They moved to Michigan for Ray to find work, but soon moved back to Dickenson County, Virginia. In 1952, Ray had to return to work in Michigan but at the very first signs of labor, Ray caught a bus home just in time for the birth of Brenda Lea. Ray then had to return to work. In August 1954, Walter Ray was born. They finally settled in Marion, Ohio, which remained their home until the summer 2019 then they moved back to Clintwood, Virginia. In 1958, for a short while Jane worked in the laundry room at Hotel Harding. Jane has always loved to sew, quilt, can and add a crafty look to their home. In June 1974 Donna married William Fannon of Pennington Gap, Virginia. She gave them two granddaughters, Beth Lea and Amy Gail. Beth Lea married Walter Shell and they gave Sarah Jane and Ray two great-children, Ella and Jack. Amy Gail married Chris Byington of Pennington Gap, Virginia. In May 1971, Brenda married Kenneth Mullins of Haysi, Virginia. She gave Jane and Ray two grandchildren, Kenneth Jr. and Sarah Nicole. Kenneth Jr. married Kayla Vaughn of Kingsport, Tn. Kenneth has one daughter, Kendra Gail, and two step-children, Kylen and Kember. Sarah Nicole had two children, Sydnee Nicole and Patrick Dalton. Sydnee gave them a great, great grandson, Axl. Brenda and Kenneth adopted five more children. LeeAnn, who has two daughters, Gracie and Allie Mae. Laura, who has two sons, Noah and Henry. Kim, who has one daughter, Kathrine. Christina, husband Brian, who has one daughter, Serenity and one son Jaxson along with three stepchildren, Dylan, Haley, and Madison. Steven, who has two daughters, Moon and Everly (deceased) and one son Kisten. In June 1973, Walter married Lana Smith of Marion, Ohio. They have two children, Jamie Ray and Amanda Jane. Jamie and his wife Candy has three children, Lexie, Raylynn and Miley. Amanda Jane has one son, Amoni. Jane has many nieces and nephews and a host of friends. The family will receive friends Monday, April 27, 2020 at the Mullins Family Cemetery, Wolfepen Section, Clintwood, Virginia from 12:00 p.m. to 1:00 p.m. with a graveside service at 1:00 p.m. Tarncy Mullins will officiate. Burial will follow. Pallbearers will be friends and family. The family wishes to thank those that attended and for the many prayers that went up for them. They would also like to thank all her family members, who showed their love and support and all the calls and visits and those, LeeAnn, Laura, Christina and her sister-n-law Charlena, who came and helped in her care for the past 9 months. It has been a very difficult time and without their help it would not have been possible for Sarah Jane to stay with her family. Thank you so much, Ray, Brenda and Donna Mullins Funeral Home and Staff are serving the Mullins family. Online condolences may be made online at www.mullinsfuneralhome.net

The family of Sarah Jane Mullins created this Life Tributes page to make it easy to share your memories.