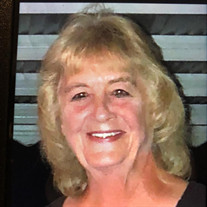 Sylvia Ann Davis, born August 24, 1963, in Clintwood, Va., left this earthly life on Thursday, September 24, 2020 surrounded by her family. Sylvia graduated Clintwood High School and was employed at Wal-Mart for fourteen years before moving to Temple, Texas in 2002. Sylvia worked for Lowe’s for several years, bought a home, and adopted her best friend, “JoJo”. In 2005, Sylvia was diagnosed with cancer and was treated at Baylor University Hospital. After months of chemo and radiation treatment, she was declared cancer free. At this time, she decided to return to Clintwood and her family. Sylvia immediately came to church and obeyed the gospel. Sylvia also ran into an old friend at church, Joe Davis. They went out on a date to Fish Tales restaurant, then went fishing. That is how Sylvia became a Davis. The Fletcher family knew Joe & Diane, Brenda & Gary, Barry & Shani, Byron & Karen and Joe’s mother and father before they were married. They were married March 9, 2019 at the Church of Christ in Clintwood. We were so happy for them. The man of her dreams had walked into her life. They had a year and six months together and were so happy. When cancer came around again, this time, she did not get to “ring the bell”. She will be so missed, we cannot express it. Her laugh would light up a room. She loved to play the guitar and sing, and did good at both. Painting also became a hobby after she and Joe married. Pool was her game, and she was a shark. Always when you remember her, smile, that’s what she would want. She will also miss seeing her “Little Man” Owen grow up. She was preceded in death by her father, Sylvan Fletcher and mother, Anna Love Fletcher, and sister, Pamela Sue Robinson. Survivors Include: Her husband: Joe Marion Davis Sisters: Candias (Gary) Hall of Clintwood, Virginia, Cathi (John) Seabolt of Appalachia, Virginia, and Courtney (Robert) Phillips of Clintwood, Virginia Beloved nieces and nephews: Holly (Chris) McFall, Adrianna Phillips, Derick Robinson, and Danial (Kim) Fields Step son: Steven (Sheila) Davis Step granddaughter: Kaitlyn Davis The family will receive friends, Sunday, September 27, 2020 at 1:30 p.m. with funeral services to be conducted at 2:00 p.m. with Gary Mullins officiating. Burial will follow in the Bise Cemetery, Bise Ridge Section, Clintwood, Virginia. Pallbearers will be family and friends. Honorary Pallbearer will be Steven Davis. Mullins Funeral Home and Staff are serving the Davis family. Online Condolences can be made at www.mullinsfuneralhome.net.

The family of Sylvia Ann Davis created this Life Tributes page to make it easy to share your memories.

Send flowers to the Davis family.