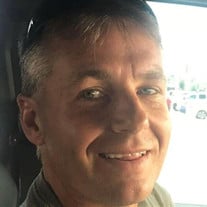 Wesley Shane Hughes-Greeneville, TN Wesley Shane Hughes, 45 went to be with his Lord and Savior, Jesus Christ on Tuesday night, December 4, 2018, at UT Medical Center in Knoxville, TN. Shane was born on July 2, 1973, in Johnson City, TN, to Louis Hughes and the late Patricia Fleming. A native of Sulphur Springs, TN, Shane lived in the Tri-Cities area for the most part of his life. He was a Baptist by faith and was a very loving and thoughtful son to his father, Louis who he called several times a day just to tell him, “I love you, Dad”. He was a great horseman who learned from his father to ride horses at a very early age as well as a highly equipment operator. He was a loving son, father, grandfather, nephew, partner, and friend and will be dearly missed by everyone who knows him. In addition to his mother, Shane was preceded in death by his grandparents, Homer and Eula Hughes, and Dempsey and Lori Fleming; his uncle Larry Hughes and James Keener. Aside from his father, Louis those left to cherish his memory are his daughter Alexis; son, Blake and daughter in law, Taylor; grandson, Gannon; life partner, Wendy Lane; uncle, Allen Hughes, and Allen’s wife, Kathy; aunt, Kathy Hughes Dyer and her husband Charles Dyer; cousin, Holly Hughes and her mother, Christine Hughes. Lastly, Shane had a very close relationship with dear Aunt Zettie, his mother Patricia’s aunt who loved him dearly like her own. The family will be receiving friends and family on Tuesday, December 11, 2018 from 10:00 am to 12 pm at Snyder’s Memorial Gardens located at 5913 Kingsport Highway, Gray, TN 37615. Funeral service will start promptly at 12:00 pm in the chapel with Wendy Lane and Shannon Lane, Officiating Minister and Celebrants. Interment will follow at 3:00 pm at Happy Valley Cemetery. Condolences can be sent to Shane Hughes’ family at the funeral home’s website. Snyder’s Memorial Gardens Funeral Home is honored to serve the family of Mr. Wesley Shane Hughes.

The family of Wesley Shane Hughes created this Life Tributes page to make it easy to share your memories.

Send flowers to the Hughes family.